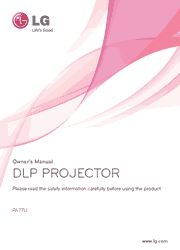 1. Connect an RF cable to the connector port on the bottom of the antenna. If the cable is not long enough, you can use a coaxial cable.

2. Connect the other end of the cable to the ANTENNA IN port of the projector.

3. Attach the antenna to a wall near a window temporarily and use the Auto Tuning function of the projector to tune channels.

4. Install the antenna in a place with the best reception using the signal strength indicator.

3D imaging is a technology that utilizes the slight difference in left/right eyes to make the images on the projector appear just like real-life 3-dimensional space.

With the Windows 7 or Windows 8 PC operating system or DLNA-certified device (e.g. mobile phone), music/videos/photos may be played on projector without installing a separate program.

2. To play a music/video/photo file, rightclick on the file and use the Remote Playback or PlayTo Windows 7 or Windows 8 feature.

3. Content will be played on only one device even if more than one projector or device is connected. Play speed can vary depending on network speed.